About Us
...on a November day in 1919, a bridge club of twelve members met at Cameron Lodge and Miss Mary Cameron suggested that this bridge club be changed to a garden club. This suggestion was heartily seconded by Mrs. Joseph Walker who had considerable garden experience acquired in her association with a Philadelphia garden club called “The Weeders”  and the floral experience gained by Mrs. Harper in her former close contact with the New England Garden Clubs. From this meeting the Dolly Madison Garden Club materialized.
​ 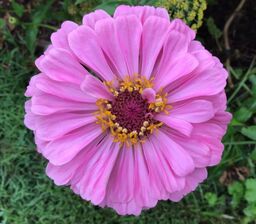 The Dolley Madison Garden Club has worked to save dogwoods, control billboards, abolish automobile graveyards, plant trees and enhance Taylor Park in Orange, Virginia. The 2019 Centennial gift of the Lotus Blossom Fountain sculpture in Taylor Park was a major Club contribution to the community. Archival work by Club members in the Garden History and Design Committee supports efforts to document local gardens for entry into the Smithsonian’s Archive of American Gardens. Submittals include, among many others, the Orange County estates of Mt. Sharon and Springfields and most recently Taylor Park in downtown Orange. Club members constructed a Medicinal Herb Garden at the Civil War Medical Museum in Gordonsville in 2015, and donated an Oriental spruce tree to Dogwood Village in 2016. The Club hosts a public plant sale in September every two years,  a Conservation  forum., and a public Zinnia Show every three years featuring professionally judged horticulture and artistic entries.

Annually, the Dolley Madison Garden Club hosts a Club-sponsored Garden Club of Virginia Historic Garden Week tour in April. Proceeds from the tour support GCV projects to beautify and restore gardens and an ongoing partnership with State Parks. All Club members participate in the annual Historic Garden Week tour. In addition, Club members participate in one of the Club's flower committees and in a second Club committee.

We are a  non-profit 501(3)(c) all volunteer organization. Our members provide their time and talent to further the goals of horticulture advancement, protection of the rural heritage of the area, and meaningful community projects and engagement.
​